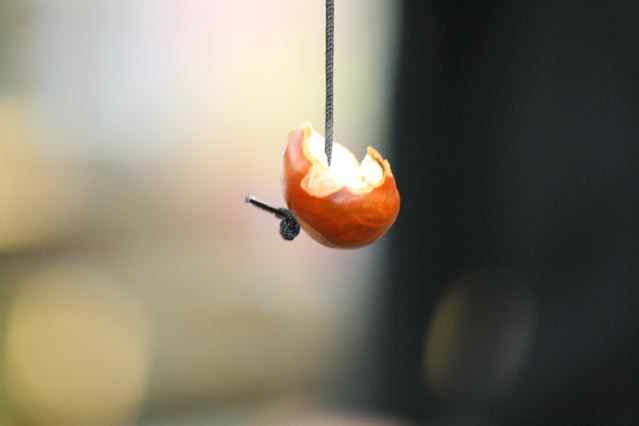 Woman finally gets her hands on D.I.C.K. prize

It was a new venue and a new winner for the 2nd annual Dulwich International Conker Knockout (D.I.C.K.) which took place on Saturday.  Due to works to refurbish the traditional tournament home on Red Post Hill continuing to overrun, this year’s championships were hastily relocated to the famous Crown and Greyhound ground nearby.  And the new venue was first time lucky for rookie Veema Shah who confounded the pundits and the bookies by becoming the first female champion of the event, proving on the way that technique is often more important than raw power in the turbulent world of semi-professional conkers.  This was truly a remarkable day and the dozen people who had braved the cold to cheer on the competitors had never seen anything like this.

The championship had initially made a slow start with a tense tactical battle between local girl Amy Hoy and Ray Kelly, representing Northern Ireland. Kelly eventually prevailed after extra time with Hoy kicking herself after having had a superior hit rate for most of the match.  But the excitement levels were raised in Game 2 with the entry of pre-tournament favourite Rick Hayworth, who took a mere two minutes to shatter the hopes of newcomer Vicki with his devastating hitting technique.  However, the victory was slightly soured for the big man from the Peak district as he sustained an arm strain which was to prove costly in the later stages.

Game 3 saw the ‘home of conkers’ (Northamptonshire’s) favourite son, Andrew Mills, enter the fray against Suffolk’s Tim “Badger” Bartlett.  It should have been a comfortable win for Mills, but despite a plethora of hits he succeeded in damaging his own conker badly and in the end was relieved to scrape through in extra time.  The eagerly awaited ‘Chris-es Point’ in Game 4 saw last year’s semi-finalist, Chris Jackson, paired off with veteran Chris Balmer, making a comeback to the game after a 30-year absence.  Balmer, who was warmly welcomed by the crowd, proved he’d lost none of his skill as he steamrollered Jackson in a mere minute.  Then Polish hopes of a first-ever D.I.C.K. win were rewarded when Marta Mills advanced on the 3-snag rule against Ralfe Rallings.  Rallings’ dirty technique was the only aberration in a tournament which seemed to have largely stamped out the controversy over snagging which had surrounded last year’s competition.  There were few words of sympathy as he hastily left the arena.

Game 6 saw new girl Shah take on Tim Flint in a phenomenally exciting battle of wills, skills, and thrills.  This match truly had the whole crowd on the edge of their seats as blow after blow was traded!  Despite a degree of gamesmanship from Flint towards the end, though, Shah held her nerve to advance in extra time with 3 shots in hand.

Next, the crowd held their breath as last year’s winner Phil Crann emerged for his first match since being dogged by allegations of misusing vaseline to tamper with his nuts.  Crann, who still protests his innocence, hit back at his critics removing a jacket to reveal a T-shirt claiming ‘not guilty’.  However, in the end he was guilty of some pretty sloppy play as he gifted his weaker opponent, Steve Hoy, a place in the quarters by destroying his own conker with some poor hitting.

The final place in the quarters was to be fought for by two ‘lucky losers’ from the first round on the repechage, Flint and Rallings receiving a lifeline chance to come back.  Although Rallings had visibly cleaned up his act, registering no snags this time round, he was devastated as a crushing blow from Flint exploded his new conker early on in the match.

The Quarter-finals started with the eagerly awaited clash between Rick Hayworth and Ray Kelly, but it turned out to be a landslide victory as the sheer power of Hayworth’s hitting saw him advance very early.  Sadly Kelly’s petulance as he recognised defeat looming almost saw him disqualified for some unsporting behaviour when he broke to tie his shoes just as his opponent was about to swing.  The next game had Mills step up to play Balmer, but this was another ‘non-contest’ – Mills’ conker had sustained too much damage in the previous round and imploded by itself after a mere five swings.

In the following match Marta Mills faced off Shah for the right to become the first woman ever to make a D.I.C.K. semi-final.  Unfortunately this was not one for the purists – one spectator even commenting “this is like watching Portsmouth v Blackburn play out a 0-0 on a cold Tuesday night”.  Eventually Shah held on to advance with a 6-2 count after the ‘five minute rule’ was invoked.  The final match of the quarters added an element of surrealism to the proceedings as Steve Hoy’s conker exploded on the very first shot it played.  His opponent, the fortuitous Flint, got lucky for the second time as he became the first D.I.C.K. competitor ever to win a match without even swinging once!

As the excitement grew coming into the latter stages, the semi-finalists were offered the chance to take a new conker for the final two matches.  But Balmer opted to remain with his ‘lucky’ nut and this proved to be a shrewd decision as he managed to edge out Hayworth in a phenomenal match which saw hit rates of over 90% for both competitors.  After the match it emerged that Hayworth was suffering from a badly strained arm which may have affected his hard-hitting technique, but despite describing himself as “disappointed” he vowed to come back next year to claim the title.

The other semi-final was a much tighter affair as Shah and Flint squared up for the second time in an hour.  Few predicted that the match would reach the heights of their earlier clash, but if anything this one was almost better as the tension built and conkers swung! Eventually, though, just as in the previous rounds, Shah’s superior hitting eventually eased her through in a third-consecutive overtime match (a tournament record).

The third place play-off saw the injured Hayworth capitulate to Flint in a relatively easy win and then it was time for the final.  Veema Shah and Chris Balmer stepped up to the plate, just one win away from biggest prize in South London conkering.  In the early stages Balmer looked comfortable as he consistently out-hit his opponent who was clinging on for dear life.  But the conker that had served him dutifully in the earlier rounds finally showed the strain it had been under and split badly until the nut had disintegrated leaving just skin remaining.   In echoes of last year’s Ashes win at the Oval, the end of the game was confused as the umpires ruled that the piece of shell left on Balmer’s string was insufficient to mount an attack amidst cries of dissent from his supporters.  But the ruling stood and a visibly tired, but elated, Shah held back the tears as she claimed her Champagne prize.

It was truly a fairytale ending to a remarkable day.  After being congratulated by her friends, Ms Shah declared herself “grateful” for her win.  When asked how she thought she’d managed to see off other competitors with greater reputations and experience she simply replied “it’s not always talent, but consistency that gets you through”.  In the end she has proved to all aspiring female conker-players something men have known for years – some women can be tough nuts to crack.