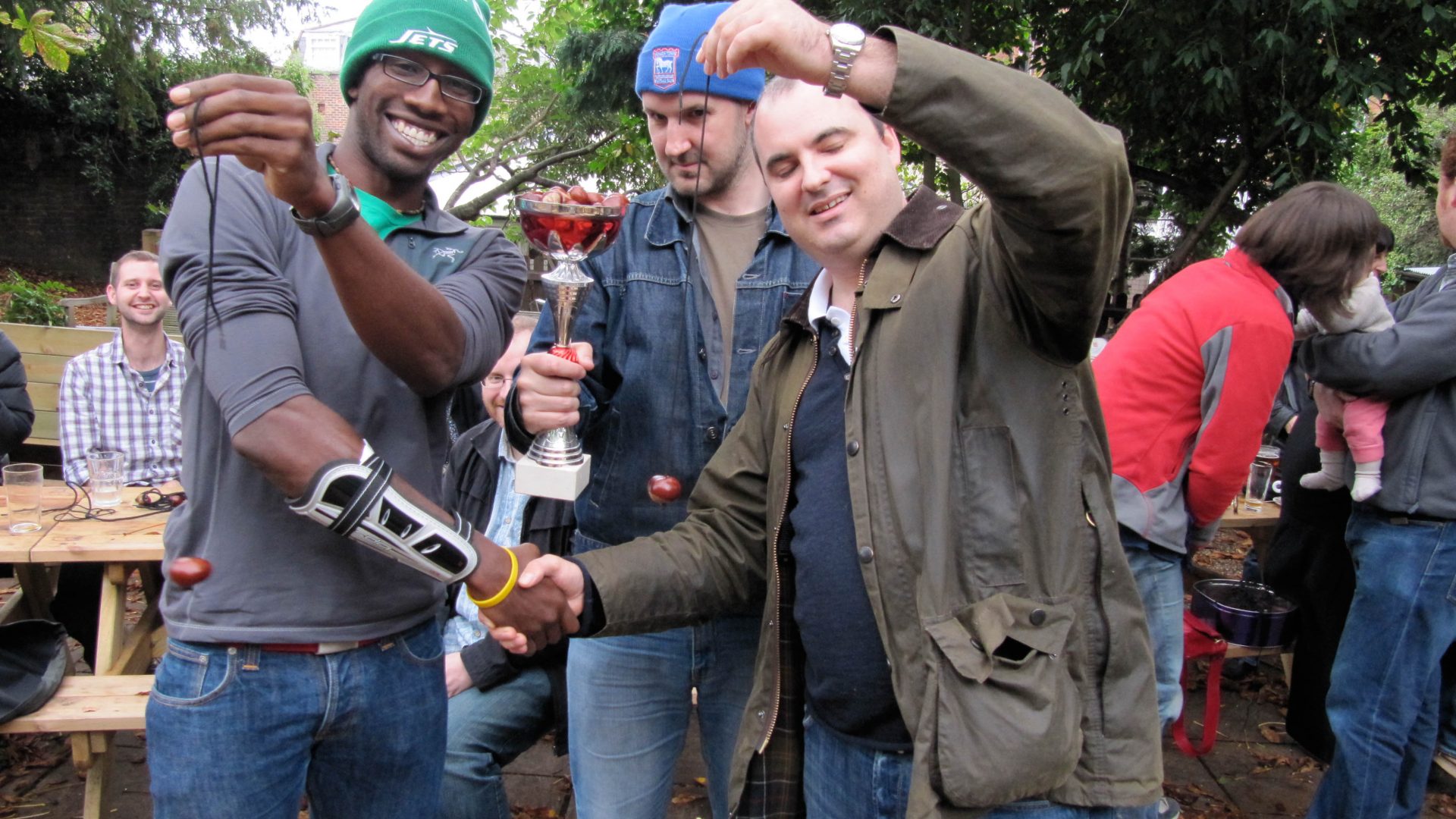 James Easens his way to victory

There was no charity offered to opponents by James Easen as he battled through his 3rd tournament to finally claim victory in the 2010 Dulwich International Conker Knockout (D.I.C.K.).  Easen – founder of the Zimbabwe Rural Schools trust, supported by D.I.C.K. this year, and a well-respected conk-petitor – said he was delighted after triumphing in a contest which ran surprisingly close to the form book for a change.

It was an exciting atmosphere at the Crown and Greyhound Stadium particularly in light of the large number of young spectators in attendance. With 17 competitors this year one qualifier was required between Ralfe ‘Snagger’ Rallings and Marta Mills. After a dynamic sweep to the final last year with good clean play, it was clear Rallings had returned to his bad old ways registering two snags early. Mills, though, drawn into Rallings’ dirty game hit back with two snags of her own and the tense game went to overtime, Rallings eventually triumphing with a smash on the fourth hit.

The first round proper commenced with 2008 winner Steve Hoy taking on new boy James Clarke. Clarke, though, was barely allowed to show what he might have to offer as a rampant Hoy did his nut in barely a minute and a half. A despondent Clarke cursed the tough draw, but had no complaints with the result.

Next was another former champion Pete Campion-Spall (the first D.I.C.K. king back in 2005) up against Bristolian debutant Alex Dunlop. The Crown and Greyhound arena can be an intimidating place for the unprepared and the unfortunate Dunlop, despite a decent start, lost heart as Campion-Spall rained down some strong hits and it was only a matter of time before the veteran triumphed.

Northampton’s Andrew ‘Millsy’ Mills – returning for his first conkers since 2008 – then faced off against Vicki Jackson. But Mills could not emulate his hometown’s sensational recent league cup victory at Liverpool, and Jackson eventually split his crack within 3 minutes. Her husband – 2008 champion and tournament favourite Chris – then set up a titanic family clash in the next round by muscling out newcomer Hayley Dunlop, despite an early snag putting him on the back foot.  Dunlop was magnanimous in defeat writing in her blog that defeat had come “as a result of my opponent’s brilliance” (an opinion which would surely be open to dispute by some more sEasened competitors…). She vowed to learn from the experience and come back next year stronger.

Next up novice Holly Harris made her debut against Australian Brooke ‘Brook-o’ Lumicisi who was mounting her third D.I.C.K. challenge in a row. Harris accounted for herself excellently, opening up a crack in Lumicisi early on, before unexpectedly exploding her conker going in for the kill. The newcomer was frustrated but gracious, stating that although losing wasn’t her ‘thang’, “it was a pleasure to lose to the Brookemeister“.

Wild card Graham Andrew, who was only entered due to a late withdrawal, faced off against Reverend Kat Campion-Spall. He became the first – and only – D.I.C.K. virgin to penetrate the second round in 2010, demonstrating a quite remarkable aptitude for big hitting. However, inexperience showed as he both hurt his leg and prospectively his nut with a reckless follow-through which was to prove costly later on.

‘Snagger’ Rallings then returned to play James Easen and the crowd were baying for his blood after he committed two very early snags. Easen may not be the hardest hitter on the circuit, but he can usually lay claim to being amongst the most accurate. However, he found himself 1-0 down in a tie-break after three shots before Rallings threw away all his hard work holding on by committing the third snag and being disqualified in disgrace. He may feel the weight of D.I.C.K. coming down heavily on him too, with the committee to rule whether disciplinary measures will be required.

The final match of the round saw reigning champion and crowd favourite, Ray Kelly, enter the fray against the stalwart Amy Hoy, appearing in her sixth consecutive D.I.C.K.. But it was clear from the off this was not the same Kelly who had wowed the 2009 event – the rumours of ‘conker-itis’ which had surfaced since appeared to be confirmed as he swung wildly while Hoy kept her focus. Kelly eventually exploded his own nut to create the biggest shock of the round.

The second round began with Graham Andrew taking on Easen. But there was to be no fairytale for the new boy this time as a second smash to the leg took half his already frail conker off the string and was to signal the end of his challenge. Nonetheless the crowd were admiring of his attacking play even in the face of adversity and he won friends at this event. The next match was similarly swift as Mr Hoy, hobbled by a split conker, was sent crashing out by Pete Campion-Spall.

Then came the match everyone was waiting for – the Jacksons reunion.  It was as easy as ABC for Chris, though, as his wife failed to match his aggressive play. Although delighted to get through, Jackson did note that he wondered where he would now be sleeping that evening.

The last quarter final between Lumicisi and Amy Hoy was a tepid affair ranking as one of the most defensive in tournament history. ‘Brook-o’ eventually won 4up&3 on the tiebreak, and was relieved to sneak through to her second semi-final. Indeed, this was a year for the old guard – for the first time in D.I.C.K. history the last four was made up entirely of competitors who had reached the same stage in previous tournaments.

The first match pitted Easen against Campion-Spall, but disaster nearly struck for the eventual winner as he registered two snags within five swings and found himself in big trouble. However, the unlucky Campion-Spall could not take advantage after damaging his conker early on and it was only a matter of time before Easen wrapped up victory.

In the second semi Lumicisi could not have played more differently than in her moribund quarter, coming out aggressively against Chris Jackson – but Jackson’s swift counter attack proved to be fatal, catching the Australian out and seeing him through to the final. Lumicisi’s mettle surfaced again in the third-place playoff, though, as she doggedly restrung her broken conker three times to frustrate Campion-Spall, but in the end the split came too early to prevent defeat.

So to the final, and given his strong performances many expected Jackson to become the first ever competitor to win the tournament twice. But it all went wrong for him as he registered a snag and then destroyed his own conker on his second set of swings.

That left Easen standing as the surprised but elated winner. He thanked the crowd and vowed to be back next year to defend the R.Kelly Cup.